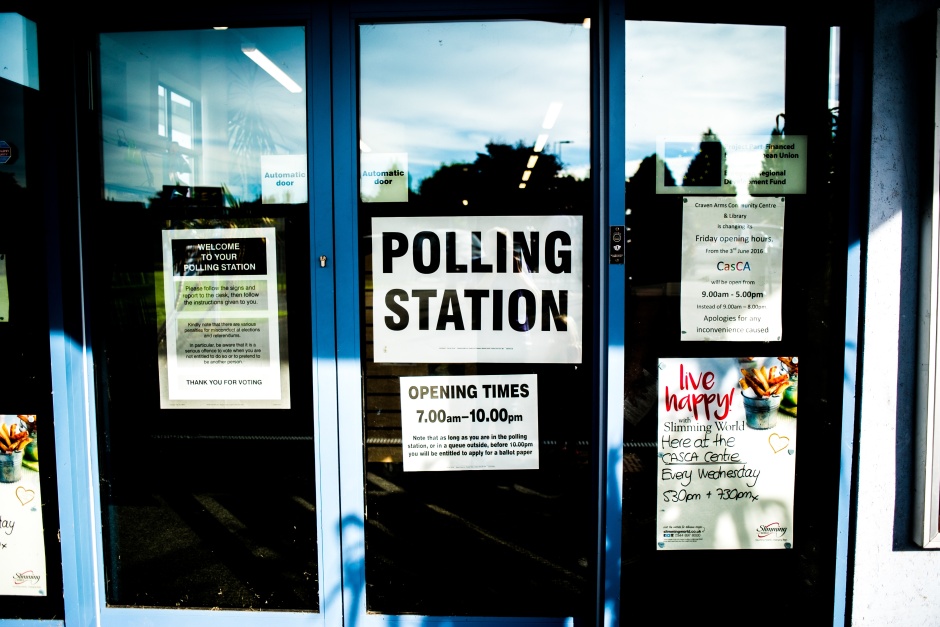 I fell asleep before the final results came in.

But I already knew which candidate was going to be the next President of the United States.

I woke up this morning and let it sink in. I scrolled through my social media and didn’t move for a long time. I finally crawled out of bed and slowly went to sit on my couch. I sat for a long time in silence.

Finally, one word came from my mouth as I began to weep.

This morning as America responded, that was the only word I could say.

I knew from the beginning I would be disappointed with either candidate having a victory. I have already spent months grieving both a President Trump or a President Clinton.

So, I did not cry this morning because of the results.

I cried this morning because many of my Christian friends called this election a victory for the church. I cried for the endless posts that said “God heard His people’s prayers”.

I cried because what they told the world was that God didn’t hear or honor the prayers of those who did not vote for Trump and that they are not His people.

Whether they meant that or not, this morning, that was what many heard.

I wept for those who woke up with a smirk on their face and prideful words on their tongue because their candidate won. I wept because many of them believe God has put his stamp of approval on this man’s anger and immorality.

I wept because though I understand a sigh of relief from those who were afraid for a Hillary presidency, I cringe at their exaltation of a Trump one. I wept because many of my friends said it “bothered them to vote for him and they were doing it hesitantly, but he seemed a better option.” I wept because when they rubbed it in people’s noses this morning, it did not seem that it was hard or that it bothered them at all.

I wept because “How we walk with the broken speaks louder than how we sit with the great.” (Bill Bennot)

I wept for the way that many of my Christian friends chose to walk with the broken this morning.

I wept because as a person who voted third party, I was condemned, criticized, mocked, rebuked, scorned, and belittled. I wept because I cannot even fathom what people on the other side have endured and will endure. I wept because many of these are people who claim to operate under a law of love and a Gospel of peace.

My heart broke at those who sincerely asked Christians, “How do you explain this to your minority, Muslim, LGTBQ, and disabled friends?”  I wept because I know that many of the Christians I know do not have those kinds of friends.

Later, as I ran to get coffee, I found myself weeping again in the car. But this time, I wept because the barista told me that he liked my shirt that says PRAY. I wept because we are different genders, different races, and together we looked at one another in the eye and agreed that more than anything in these times, we need to PRAY.

I wept because though I am broken, I am thankful my hope was never in either of these candidates. I wept because I am thankful that I stood my ground. I wept as I told God that even though I was mocked, condemned, rebuked, I want to learn how to show others what it means to be a disciple who does not sacrifice their influence among Christians and non-Christians for an earthly government.

Today, I continue to weep because many voted for Trump believing he will help maintain their religious freedom. I weep because my prayer is that this freedom and their Christian influence does not become tainted by a pride, condemnation, or judgment of others.

Today, I weep, but with hope that God is faithful. His grace is sufficient. I weep, asking for faith to believe that His true church will wake up and will be known for their love.

I weep today and I cry out “Father”. May He be merciful and forgive us in these times when we know and do not know what we do.

I love Jesus. I like peanut butter, coffee, stories, photography and making all people laugh. I love a good adventure and enjoy writing about the life lessons I learn along the way. Come be my friend.

Happy birthday to a dad and man like no other. Thanks for supporting me in every stage of life, for loving my husband quite possibly as much as you love me, for championing every dream and helping me make them reality (no matter how crazy they are). You’ve always believed in me and lifted me up further than I could have ever gone on my own. Your prayers and love are some of the greatest gifts of my life. I am blessed to be yours. Here’s to another year of celebrating all you are and have always been to me and so many others!
Genuinely, we would love to grab you all, make you some coffee or tea and give you this news face to face! Sadly, time just doesn’t allow for that with this quick transition. A new job is taking us to the Raleigh area very soon! We could not be more surprised or excited. To be honest, it is somewhat bittersweet—we are very sad to be a little farther away from some of our friends and family, but over-the-moon to see what God has in store for this new chapter! He has already provided in miraculous ways and opened doors we couldn’t have imagined. We are humbled and grateful to be called on this journey with Him and excited to see what saying “yes” to His invitation on this path this will lead us to! We love you guys! Thanks for being in our lives and supporting us along the way!
Honestly, the last couple of weeks would have been incredibly more difficult without him. A wise woman once told me to marry my best friend and I thought it sounded nice, but I didn’t begin to know the value of those words until now. When swimming through grief, weighing hard decisions, or trudging through the mundane, I couldn’t imagine doing it with anyone else. He keeps me entertained (as you can see from these photos) and he supports me and works through all the chaos, pain, and joy with me. Thankful barely scratches the surface of what I am today.
2019. The year that kept taking a turn. My favorite year. One full of joy, laughter, hope, promises fulfilled, goals accomplished. Graduation, engagement, marriage, new friends, old friends, God doing more than I imagined. But it also had its challenges with hard conversations, loss, pain, and grief. Thankful for all God has done, but mostly for His presence that was with me through it all.
There will never be enough words. 27 blessed years with my Nemaw. She believed in my gifts, abilities, and potential more than I ever could. She scratched my back, braided my hair, came to watch me cheer at football games, and made me laugh until the very end. We shared a sharp sense of wit and humor, a love of books, strong wills and opinions and a stronger love for Jesus. I am grateful beyond words to be hers and to have seen the beauty of her heart and life. I’ll miss her always. I’ll miss going into her house and always knowing I’d need to set the clock (because it was never the right time) and making the coffee and knowing she would shake her head that I always made it too strong. I’ll miss talking politics, sharing our favorite books and hearing her stories. I’ll always hear her when I hear Christmas carols or the old Bible songs she taught me to sing at the foot of her bed. Thankful to know we will laugh and sing together again at the feet of Jesus.
A very merry Christmas with new family! So thankful for my first Christmas with Matthew & his family!!