I thought I’d be married by the time I experienced these things. I thought I’d have a loving man to help me through the rough days, to hold me when I wept at the sight of a destroyed home, to cook me dinner when I’d had more than my share of disaster. Unfortunately, that is not the case. No, I do not have a two year old. I have two things much worse. Two dogs. One of them, the new puppy, Theodore (who actually belongs to my sister) and my old raggedy Liddle who, bless her is almost on her last leg.

I had successfully trained the world’s worst dog. Granted, it was a compromise, but we’d had an unspoken agreement. Liddle would potty on her puppy pads or newspaper and I wouldn’t force her delicate paws to walk all the way outside. Is it ideal? NO! Still though, considering she was the world’s worst dog, I was willing to take whatever I could get. I had finally convinced her not to pee all over the rest of the house, I saw the puppy pads as a huge victory.

Liddle, while she barks at EVERY LITTLE THING, has grown tired in her old age. She’s finally given up on being an attack dog. She’s been pretty much all bark and no bite for quite a while now. Now that Theodore is here, she has reverted to her old ways. She no longer sees a need to comply to our silent agreement. No, now she hates us for bringing that menace home so she decides to pee everywhere and bark every five seconds.

When it happened, when Jordan caved and got Theodore, the chihuahua/jack russell mix from the pit. I didn’t know I’d be spending these weeks dealing with the world’s TRUE worst dog. Just when I think I’ve got him beaten to the point of obedience, he does one of these things:

a) pees on the internet cords

b) steals a shoe

c) rips his newspaper and/or puppy pad to shreds

e) licks one of my waffle fries from chick-fil-a

He does all the things and more..on a 30 second rotation. His new fascination? Trying to remove the belt loop on the jeans that I am currently wearing. We keep playing ring around the rosie, with him hanging on my pants and me popping him with the newspaper. The only peace I have is when he sleeps, which right now..is on my left hand as I’m trying to type this. I lie not. I cannot escape him. 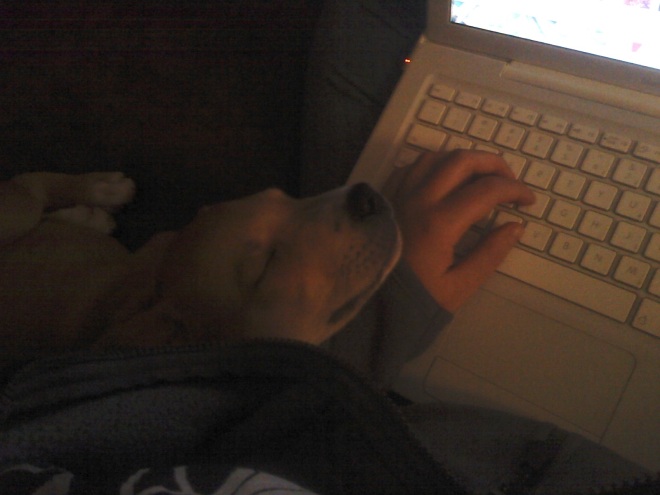 I used to watch this movie called Shiloh. It was about this little beagle who comes from an abused home and finds a little boy who takes him in and fights to keep him away from his abuser. When I was little, I used to cry at the abusive redneck who beat his poor dogs and called them “Get”, “Out”, “Scram” and “Idget” (he said that was their names). I used to think about how, if I ever saw him, I would take my tiny ten year old fist and deck that fool between the eyes.

After these past three weeks, I’ve started to think that if I met that man.. we’d sit down and have a glass of lemonade together. We’d probably share war stories, show battle scars and reminisce on the times we wanted to throw our dogs under a moving bus (granted, the difference being I would never actually do it, and that man prob. would have). Still, I can understand the man’s frustration. I can understand how he wants to call the thing Idget. You wake up early to take the thing out, only to watch him walk back inside and pee in the kitchen. You let him out of his cage only to sit while he tries to eat your jacket, shoes, finger, jeans, and the newspaper in which you’re using to beating the crap out of his rebellious rear-end.

All of this to say. I did not sign up for this. I do not want to be a parent. I do not want to run after him screaming “NO!” I do not want to put him in time out and try and teach him the lessons of moral living. I want to be young and be able to sit on the couch, on facebook without worrying about my jeans being ripped to shreds or if I’m going to have a nose still attached to my face in the next five minutes.

I need a vacation.

One thought on “The Terrible Two”